skip to main | skip to sidebar

Thoughts on "The Nightcomers" by Eric Ambler 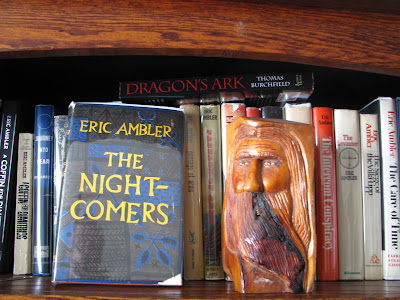 It happened last year, and it has happened again this year: I have stumbled on a book by a favorite author that stumbles; a book that’s not as good as other of his works that I’ve read so far; a narrative that, for a few reasons, did not work for me, and I suspect may not work for others.

The novel in question is The Nightcomers by one of modern thriller fiction’s founding parents, Eric Ambler, whose novels I visit every year. Published in 1956, The Nightcomers (available in the U.S. as State of Siege) stands midway in the Ambler oeuvre, following The Schirmer Inheritance and preceding Passage of Arms.

Here, Ambler leaves post-World War II Balkan Europe for new territory, Southeast Asia and the island nation of Sunda, apparently a stand-in for Indonesia, which was entering into a brutal Communist insurgency at the time.

(Interesting personal history: during this same period, my father, accompanied by my mother and two older brothers—but not I, as yet unborn— lived and worked as a scientist on a rubber plantation on the Indonesian island province of Sumatra. This took place, as I heard later, in a jungle of dangerous conditions, from foot-long scorpions hiding in shoes through near-fatal malaria to Communist insurgents.)

Ambler’s protagonist this time out is Steve Fraser, a British consulting engineer heading up a government-sponsored, an American and British-funded dam project in the steamy northern jungles of the country.

Fraser seems somewhat more level-headed than some other Ambleresque heroes, less desperate than say, the unemployed Nicholas Marlowe in Cause for Alarm. His project, though challenging thanks to numerous cultural misunderstandings, has gone well. Fraser will be sailing home on a comfortable bed of cash.

After a very weedy setup of his circumstances, Fraser has only one more night to spend in the nation’s capital, housesitting for an Aussie pilot friend who’s out of the country. And, he figures, why not start celebrations early with one night of whoopee with a high-class hooker named Rosalie whom he meets in a high-class bar (frequented by various dubious types)?

Unfortunately, there’s a little matter of a military coup d’état—who, interestingly, with an Islamist bent--to keep him from safely leaving the country at dawn.

The coup leaders strike just before Fraser is about to leave the apartment for the airport. They take over the building he’s been bunking in because it’s also the only communications center in the capital. As a result, Fraser and his paramour become prisoners in the apartment bedroom.

And prisoners they stay for the bulk of the novel. Rockets and mortars crash around Fraser and Rosalie and a heated romance blossoms between them. Fraser is forced by his captors to help fix the basement generator so they can continue to broadcast their propaganda. Alas, while the revolutionaries have much passion, they don’t have as much sense and cunning as the government they’re rebelling against. Soon they are under siege and, in addition to a traitor in their midst, they’re also at odds with each other.

There are the usual apt and interesting perspectives you find in Ambler novels including tart observations regarding cultural miscommunications and the strains of post-World War II colonialism for the colonized and the outlook of those caught in the middle: “We did not win our independence from the Dutch,” one wily pragmatist says. “Force of circumstances delivered it into hands which were unfit to receive it.”

The romance between Fraser and Rosalie the prostitute is touching and the atmosphere often vivid and humid—we learn that, among other things, starvation is one problem Southeast Asia didn’t suffer from, at least back in the 1950s. But The Nightcomers, in addition to being didactic, is a trifle boring, especially for an author as charged up and engaged with the world as Eric Ambler.

The action is static, the forward movement lacking. This may be problem inherent in with a siege scenario. In this novel, Ambler appears to have stacked the deck too high against Fraser, painted him into too tight a corner, leaving him nearly helpless to make his own escape or rescue. He reacts, but is unable to convincingly cross the hurdles that block his way.

Ambler’s best novels, such as Cause for Alarm, are cat-and-mouse chase novels through the backwaters of twentieth-century intrigue, but with The Nightcomers, the mouse is almost completely walled up and the cats have about covered every hole. As result, the novel also feels limited in its perspective on the world it wants to know. It needs to get out more.

Photo by author
Thomas Burchfield has recently completed his 1920s gangster thriller Butchertown. He can be friended on Facebook, followed on Twitter, and read at Goodreads. You can also join his e-mail list via tbdeluxe [at] sbcglobal [dot] net. He lives in Northern California with his wife, Elizabeth.

Posted by Thomas Burchfield at 1:15 PM

I didn't find this as boring as you did - I've just finished it - but I agree it isn't awfully grippy. I also find the hero's relationship with the woman exploitative, especially in the last pages, which leave unspoken so much about the implicit racist views of the time (interesting to compare with The Quiet American, published at a similar time, and which I recently bought on the same day as the Ambler). Nor is the prose especially stylish or attractive. But: there's plenty of authenticity here, good observation about Indonesia, some quite honest sexuality (for the times), and the sense that Ambler, when writing about voiolence and violent men, knows exactly what he's talking about; and that's what, for me, lifts him above so many other genre writers.

Thanks, Martin. I agree: even subpar Ambler is better than most everyone else!

This was my first or second Ambler and I loved it despite its flaws. I've been buying up his work whenever I find it, but your Ambler shelf makes me a little envious.

Thanks, Thomas! Hope you enjoy the rest, BACKGROUND TO DANGER was a favorite of mine. Among his later books, DR. FRIGO stood out for me. (I;m still look for a first ed of LIGHT OF DAY.

Some Favorite and Respected Authors